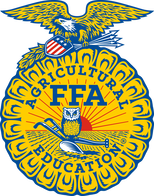 "Future Farmers of America" was founded by a group of young farmers back in 1928. Their mission was to prepare future generations for the challenges of feeding a growing population. They taught us that agriculture is more than planting and harvesting-- it's a science, it's a business and it's an art.

FFA continues to help the next generation rise up to meet those challenges by helping its members to develop their own unique talents and explore their interests in a broad range of career pathways.

We are still known as the Future Farmers of America, but we are more than just that. We are the Future Scientists,  Doctors,  Veterinarians, and Leaders of our society. FFA develops a member's potential for "premier leadership, personal growth and career success through agricultural education." In California FFA, competition is broken up into five levels; Chapter, Section, Region, State, and National. Each level is lead by six or more officers who are slated and elected by their peers. The South Coast Region has eleven officers who are elected every March. The officers include a President, six Vice Presidents, Secretary, Treasurer, Reporter, and Sentinel. The six Vice Presidents represent the sections they come from, Los Angeles, Ventura, Santa Barbara, San Luis Obispo, Monterey Bay, and Santa Clara. ​

I believe in the future of agriculture, with a faith born not of words but of deeds - achievements won by the present and past generations of agriculturists; in the promise of better days through better ways, even as the better things we now enjoy have come to us from the struggles of former years.

I believe that to live and work on a good farm, or to be engaged in other agricultural pursuits, is pleasant as well as challenging; for I know the joys and discomforts of agricultural life and hold an inborn fondness for those associations which, even in hours of discouragement, I cannot deny.

I believe in leadership from ourselves and respect from others. I believe in my own ability to work efficiently and think clearly, with such knowledge and skill as I can secure, and in the ability of progressive agriculturists to serve our own and the public interest in producing and marketing the product of our toil.

I believe in less dependence on begging and more power in bargaining; in the life abundant and enough honest wealth to help make it so--for others as well as myself; in less need for charity and more of it when needed; in being happy myself and playing square with those whose happiness depends upon me.

I believe that American agriculture can and will hold true to the best traditions of our national life and that I can exert an influence in my home and community which will stand solid for my part in that inspiring task. --

The creed was written by E.M. Tiffany and adopted at the Third National FFA Convention. It was revised at the 38th and 63rd Conventions.

Learning to Do,
Doing to Learn,
Earning to Live,
Living to Serve.

FFA makes a positive difference in the lives of students by developing their potential for premier leadership, personal growth and career success through agricultural education.
Powered by